Azure Cloud Shell is one of the cool Azure features which will help you to execute Bash / PowerShell script from the browser. The best part is that Azure Cloud shell even supports CLI for Microsoft 365 without you need to explicitly install anything in the shell.

When you try to execute CLI for Microsoft 365 after creating a new Cloud Shell, we will get an error which is something like below,

But till the time upgrade is complete, we have a workaround which could be implemented so that you can execute CLI for Microsoft 365 in Azure Cloud Shell seamlessly.

Though the team is actively working on updating the node version, we will not be able to use Azure shell for CLI for M365 till the upgrade is complete. We do have a workaround for the same using the node on top of Node Version Manager aka NVM. You can follow the below steps if you want to know the complete steps 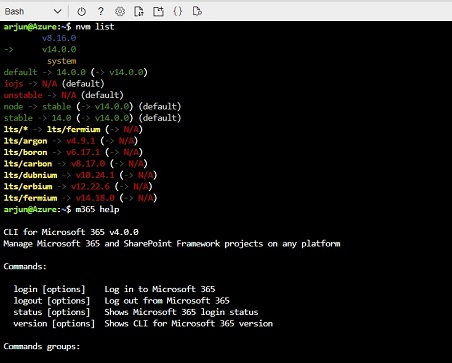 This is just a workaround till we have a permanent solution from Azure Shell team for the same.