Setup and configure WSL 2 for your development setup

Ever since the release of WSL (Windows Subsystem for Linux), it has been all over the news and the beatiful flavour of Linux which could be used via Windows. I am not going into the benefits of the WSL and its grip over the performance. In this blog, I will talk through the tips & trips and the ways how you can beautify your terminal which shows the needed information in your terminal in quick glance.

I am not going into the details on how do you setup WSL in Windows 10. There is a great Microsoft Docs article which has explained on how to do that

Before you configure the steps mentioned below, all you get is a terminal window something below.

Since we are focusing on setting up WSL terminal, it is best to keep your Ubuntu Linux terminal as the default terminal. Once you do that, the moment you open Windows Terminal, Ubuntu Window will get opened. 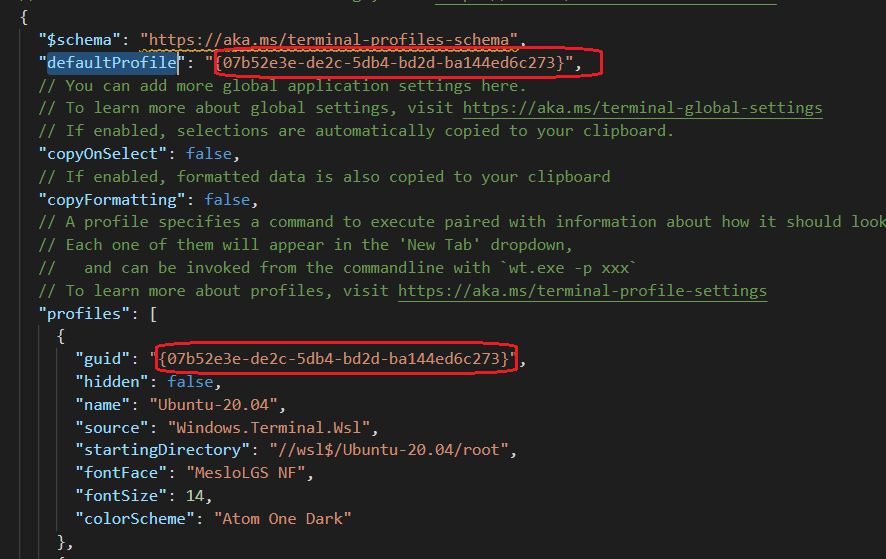 By default after configuring Linux, it will be configured to open your default profile folder which will be something like this /mnt/c/Users/yourusername

Microsoft recommends to have your Linux based codes in WSL File system rather than native Windows file system.

According to this post by the Super Nerd Scott Hanselman,

performance in WSL is lightning fast if your source code is in your Ubuntu / Linux mount under ~. If your source is under /mnt/c or /mnt anywhere, the git calls being made to populate the prompt are super slow. Be warned. Do your Linux source code/git work in the Linux filesystem for speed until WSL2 gets the file system faster under /mnt

3. Add themes to your terminal

We all like our terminal to look beautiful, don’t we. You can even configure the theme in your Terminal settings. All you need to do is to add a colorScheme attribute something like below "colorScheme": "One Half Dark". I personally like the theme called “One Half Dark”. There are lot of default themes which is provided by Microsot which could be viewed from HERE

You can even add a custom theme if you would like to. Custom theme could be added in the attribute called schemes and one of such theme would look something like below after you add in the schemes section .

Another installation which you may need is zsh. zsh is another shell like Bash or SH. zsh provides more flexibility for your shell and you can configure themes and other settings pretty easily using zsh. For installing zsh, you can execute below command,

Oh My Zsh is an open source community-driven framework for managing your zsh configuration. For installing the same, this installation guide has given multiple options where you can install Oh My Zsh. During the process, you may see below screens and it is totally normal. All we are doing is that, we are making Oh My Zsh as the default shell configuration

If you are like me, you will definitely love Visual Studio Code as a default editor for project files. For you to install VS Code in your WSL, all you need to do is to type in code .. That will prompt installation and would be completed once you accept that.

Before we start installing plug-ins and beautifying the terminal, let us install some of the development tools or Command Line Interfaces to make our life super easy

For installing NVM, you need to.

IF the above snippet is not available in .zshrc file, add the above code so that the command nvm works when terminal is loaded

Install Node version and alias it

There is a brilliant way where you can alias Node versions using NVM. This was a brilliant tip which I saw in Garry Trinder’s blog about Setting up WSL 2 where he has shown this tip when you quickly want to switch the node versions. There are also many other cool tips available in his blog where you can use in your terminal

The above snippet will install node version 14.0 and will alias it with cli-m365. Super cool tip isn’t it.

Similarly you can install other node versions and set the alias for them. Something like below,

There are many plug-ins which you can install which will make your life as a developer super easy. I am giving the list of some of the plug-ins which I have installed in mine

zsh-highlight is one cool plug-in which will highlight your commands with different colour so that you can avoid any typos while you code.

Once you have installed the plug-in, follow the steps below so that it gets loaded everytime you open terminal

You will notice that command npm in the above screen is showing in green colour. This will be handy when you type a command and ensure that the command exists by looking at the colour.

zsh-autosuggestions is a great plug-in which suggests commands as you type based on history and completions. This will be super helpful when you are developing CLI commands like CLI for Microsoft 365 and you want to test that out without retyping the whole command again and again. You can install it using Oh My Zsh approach or any other approach mentioned in the installation guide

Tip : Make sure the you have added the plug-in information in zhrc file and once you have finished adding, your zhrc file may look something like below

Once installation is complete and you have re-opened the terminal, your auto-suggestion may work as expected.

The biggest adwantage of the Oh My Zsh is the ability to install beatiful themes. With the themes, you can have all the needed informations like, Git Status, Node Version, Package Version, Execution Time etc shown in the shell. This is will helpful when you want to see the needed information in single screen without executing another command to know the status.

In my case, I have used a theme called Powerlevel10k which has super cool features with the theme. Installation for the theme is super easy, you can use the installation of the theme using Oh My Zsh approach. Once the installation is complete, ensure that the theme in the .zhrc file is changed to the new theme. So the theme attribute may look something like below.

In the above case, I have commented the original theme robbyrussell. It is not necessary, you can even remove that line all together.

After the installation of font, esure that the attribute "fontFace": "MesloLGS NF" and "fontSize": 14 is added in the settings.json. Your final Profile settings may look something like below

One of the biggest advantage of this theme is that - you can design how the shell looks using a User Interface. The theme configuration manager will ask set of questions and will show how the screens looks like. You can easily customize the theme without editing the theme file which I loved about this. You can also modify the theme at any point of time. Some of the cool configurations which I loved about this theme are

Once you have configured everything, your screen may look something like below

If you are not happy with the theme exlained here, there are also other themes which you can refer from Oh My Zsh themes and you can easily install and configure the same based on your requirement.

Terminal After the setup

Once your setup is complete, your terminal will look something like below.

Running Version of the WSL2 Terminal

Please note that the icons in the below screen recordings are not shown properly. It is an issue with the screen recording. Once you have configured everything properly, it will be shown correctly

Trust me, with this terminal in place you can really feel the difference in the run and build performance for your projects. So why wait? Start setting up the terminal. All it takes is less than half an hour for all the above steps.

Let me know how did the configuration go.